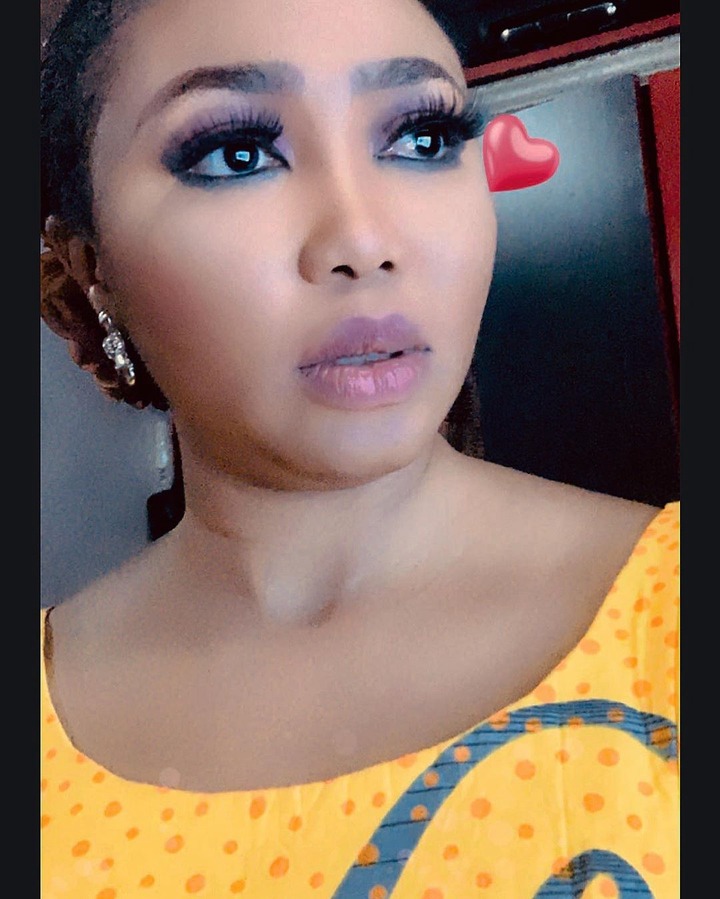 Ummah Shehu is one of the popular faces in the Hausa movie Industry known as Kannywood. She is not only an actress but a movie producer who owns a movie production outfit that goes by the name 'Yar Shehu Movies. The 30 years old actress /movie producer attended Sheikh Abubakar Gumi College, Kaduna for her secondary education and School of Health Technology for her tertiary education. Unlike some actresses whose love for watching movies or acting inspired them to go into acting and in most cases got into the profession through the assistance of some topnotchers in the Industry, Ummah Shehu's entry into Kannywood was by accident, as according to her, she became an actress through a family friend named Tijjani Asase who came to her house in Tudun Wada in Kaduna to greet her and in the course of their discussion, told her he was going to a movie location where a new film is being shot and that she should follow him to the place to watch how movies are shot. The actress remarked that when she got to the movie location as a spectator, the movie director, Falalu Dorayi was already at the peak of anger because the actress who was supposed to feature in the movie was absent and that it was against this background that the movie director who insisted that the scene must be recorded, requested her to act the role and thereafter gave her the script to go through, which she did within two hours and thereafter the scene of the movie was recorded. The movie titled "Sa - in - sa" in which Ummah Shehu acted as the wife of the Kannywood superstar, Adam Zango was a masterpiece. The summary of the storyline of the movie is an attempt to bring into light the danger inherent in constant quarrels and physical attacks by parents in the presence of their children. With the release of the blockbuster movie in 2015, the actress became an instant celebrity and the toast of lovers of Hausa movies. She was also inundated with calls from movie directors and producers who wanted her to feature in their movies. In recognition of her performance in the movie, she bagged the City People Entertainment Award in 2015. The actress has featured in many movies such as "Hawan Dare", "Wuta kai kayi", "Maliya", "Da'aria ", just to mention a few.

In year 2017, the actress started a movie production company known as 'Yar Shehu Movies, thereby adding another feather of that of a producer to her cap. At the unveiling of her movie production outfit, the actress remarked that since the day she joined Kannywood, she has always nursed the idea of going into movie production because it would provide her a veritable avenue to tell the society some of the good stories buried in her, especially stories that deal with love and relationship and that most of her stories are combinations of true life stories and fictions which could fit into some people's lives. It was therefore a dream come true as the enterprising actress /producer released her much awaited high - budget movie titled "Burin So" towards the end of 2019. The movie, which was produced from the stable of 'Yar Shehu Movies was directed by the ace director, Mustapha M Shareef who also featured in the film as the lead actor alongside Ummah Shehu, who featured as a lead actress.

The actress acknowledged the fact that Tijani Asese was instrumental to her joining Kannywood and that if not for him, she wouldn't have gone to the movie location where she was asked to cast in the movie that shot her into limelight. She also acknowledged the kind gesture of Falalu Dorayi for allowing her to feature in the movie that changed her life story. The actress is full of appreciation to Ali Nuhu and Yakubu Mohammed for touching her life in the sphere of acting. The actress has huge Instagram followers which she uses in connecting fans, friends, her colleagues in Kannywood and others. She is also active on Facebook.

Ummah Shehu, the BURIN SO sensation is really a great lady with big dreams. She is already shining in Kannywood and she will continue to shine because she works for it and she deserves it.